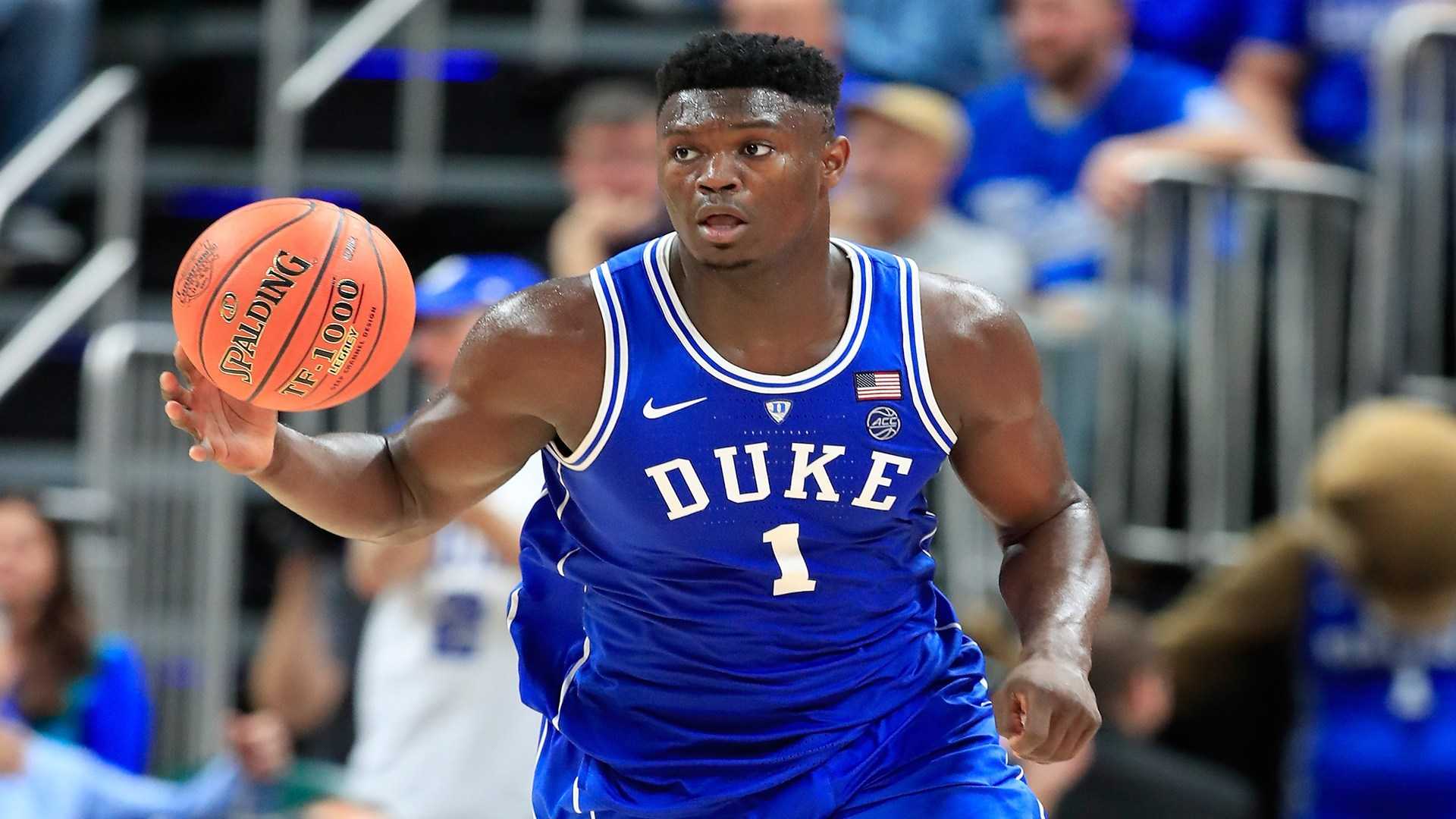 Now that St. Patrick’s Day is behind us and as we step into spring, marketers across North America are being distracted by something new on their desktops, mobile phones and televisions. Yes, this happens every day. But one annual celebration brings our obsession with technology to a whole new level. Groundhog Day? Nope. National Margarita Day? Try again. SXSW? Not quite.

The answer is the NCAA Basketball Tournament, or, as we lovingly call it, March Madness. Every March, 68 Division 1 college basketball teams come together in a single bracket with a singular dream of advancing to the Final Four and winning a national championship. Overnight, seemingly every sports-themed television channel starts broadcasting game after game to capture the crowning of the newest college basketball Cinderella.

Naturally, brands and sponsors have jumped on this consumer trend. In response, several have started to rely heavily on digital marketing strategies to garner the attention of their target audiences, especially in the sports and entertainment arena. Buffalo Wild Wings is one brand that has seized the opportunity to return to its roots as the “Official Hangout For NCAA March Madness.”

Buffalo Wild Wings is going back to basics.

It was once a can’t-miss location to catch sporting events, but Chief Marketing Officer Seth Freeman believes the company strayed from its position as a hub to meet friends for big games. Now, fresh off a sale to Inspire Brands, Buffalo Wild Wings is leveraging March Madness to roll out a slew of activation’s to college basketball fans around the world.

“Our partnership with the NCAA allows us to tap into the cultural relevance of March Madness in so many ways, whether it’s in-restaurant, in our TV ads, or on social media. The opportunities are endless,” Freeman said. - Front Office Sports

At Trialfire, we’ve come to appreciate when brands embrace social media as their new storefront. They use it to drive brand awareness and/or brand engagement while leveraging multi-touch attribution models to measure a campaign’s effectiveness at driving onsite engagement and in-store conversions.

But making sense of it all is often just as challenging as the madness of selecting a winning bracket for the office March Madness pool.

For a competition based on unpredictability, March Madness should have some fairly unpredictable outcomes, right? (I’ve won only one office pool in 25 years, and I’m currently sitting in fifth place after week one.) Still, let’s look at a methodology that marketers may want to consider when building a basketball bracket or a winning marketing campaign. 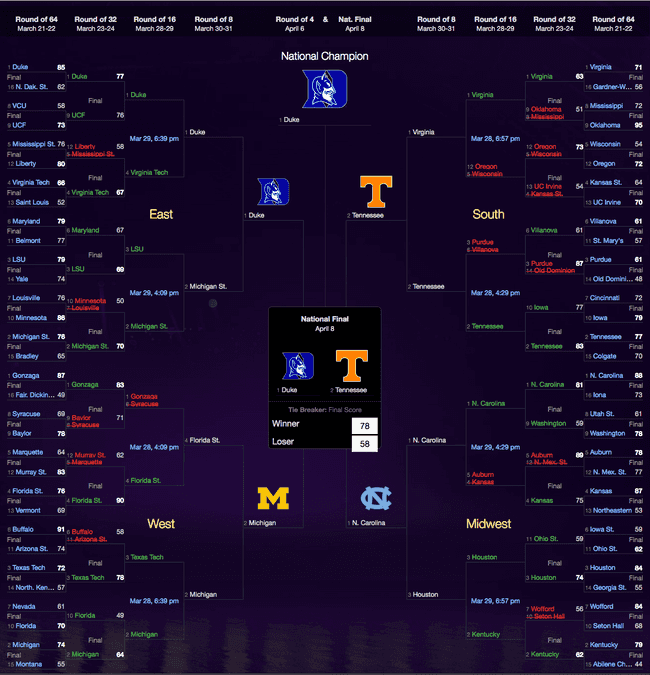 My 2019 NCAA March Madness Bracket After Week One

So who wins in March Madness?

With 11 wins over the past 80 years, UCLA is in a class above the rest.

The school’s winning past however, is not a guarantee of success. In pro football, for instance, the Dallas Cowboys are tied for the most wins in Super Bowl history, but haven’t appeared in the Big Game since 1995! The same, sadly, goes for UCLA, who haven’t been to the national Championship since 1995.

In the case of Buffalo Wild Wings, the brand might have lost its way by aligning with sector trends of restaurants moving towards fast casual dining. It overlooked the importance of its product offering and the resulting increase in beer and wings sales during March Madness. Being known as the “Official Hangout for the NCAA March Madness” for seven years distinguished Buffalo Wings within its core audience. 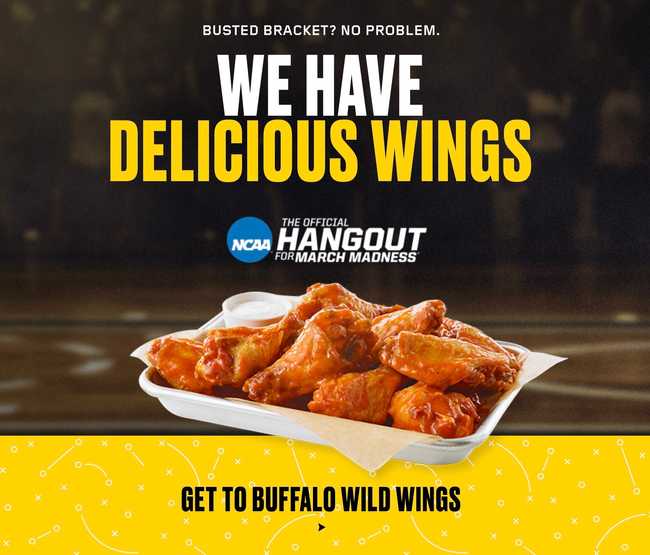 Thus, as with all athletic records, there is a recency problem here. If you trim the scope of the data to the past seven years, Buffalo Wings’ March Madness strategy illustrates how the company’s powerhouse products – when aligned with marketing events and tactics that speak to the company’s historical performance – are a marketing mix built for success.

Appearances Can Be Deceiving

But winning isn’t everything (shout out to the Toronto Maple Leafs!). Looking at wins alone tells us that stronger teams do exactly as expected in a sports tournament. Schools like Gonzaga occasionally pull off surprise upsets, but usually the outcome is predictable.

In the past 25 years, 283 different schools have made an appearance in the NCAA Championship Tournament. Of those:

To be clear, it’s not exactly a diverse group. The vast majority of teams that do get to the tournament never really make it to the most important part. At the end of the day, it’s largely the same teams that end up making it to the Sweet Sixteen and the later stages of the tournament. Similarly, with digital marketing, a new channel might appear in the mix from time to time, but it’s highly likely that a digital marketer’s most important outreach channels will remain a balance of social media, search, online video, email and display tactics.

Striking the right mix across marketing channels is what an effective marketing attribution model aims to resolve. But like March Madness, campaign optimization requires marketers to make repeated appearances in the right marketing channels. This allows them to test and gain enough data points to optimize for long-term success.

The vast majority of winners of any given Championship are from the largest and strongest conferences in Division I basketball. (There’s a plethora of possible explanations for this, but we’ll leave it to the sportswriters to figure it out.) The SEC, for instance, is nearly synonymous with the strongest teams in college football. Therefore, the easiest argument to make is that they breed the strongest teams, the ones that ultimately can hold up to massive competition and public scrutiny. Like Buffalo Wild Wings, if you play in the fast casual dining space, your brand voice can easily be lost. But not when being the “Official Hangout For NCAA March Madness” is the branded hashtag. Buffalo Wings is much better off if it selects the sports destination bracket as its primary bracket for digital marketing success.

The odds of filling out a perfect March Madness bracket is 1 in 9,200,000,000,000,000,000* (9.2 Quintillion). It’s 2x easier to win back-to-back lotteries, buying 1 ticket each time, than it is to fill out a perfect bracket. Like marketing, part of the whole game is the fact that nobody has any success in predicting the tournament perfectly.

“Being in the top 2% means you’re part of 1.8 million people, so you’re not winning Warren Buffet money.” - Fortune

Like marketers, fanatical March Madness followers who want to dive into the most obscure details and crunch the numbers in a treasure trove of data can do so in infinite ways. However, by automating the process across web properties with a tool like Trialfire, marketers can focus their efforts on messaging that resonates with their core audience, in the right channel at the right time, while setting themselves up for a chance to be crowned the best marketer in the nation or the best team in college basketball.

What Can Marketers Learn From The New England Patriots

The Patriots ability to execute the right play, at the right time with the right players makes them the envy of the NFL, so what can digital marketers learn from their approach to the business of football using ads from the Super Bowl?

Offline and Online Data: Connecting the Dots Across the Customer Journey

Tracking the customer journey across offline and online channels, while challenging, is so important to the success of your marketing efforts. In this article we discuss some strategies and tactics to help close the loop and connect the dots.